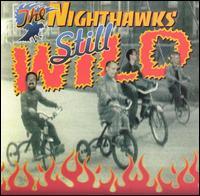 When they were first formed in 1972 by vocalist Mark Wenner and guitarist Jimmy Thackery, the Nighthawks were unabashed blues-rockers, filtering the Chicago sound of Muddy Waters and Howlin' Wolf through an East Coast bar band's sensibilities. Not much has really changed during the 27 years between their debut album and the release of 1999's Still Wild. The Nighthawks have branched out a little in the years following Thackery's late-'80s departure, the band mixing elements of classic R&B, roots rock, and country into their hard-hitting, crowd-pleasing performances. Still Wild furthers their gradual evolution into a powerful genre-jumping outfit, the band throwing out typical blues covers like Willie Dixon's »Tiger in Your Tank« and Muddy Waters' »Read Way Back« alongside raucous, country-flavored rave-ups like Charlie Rich's »Washed My Hands.« The road-weary veterans in the Nighthawks romp through timeless R&B covers like the Marvin Gaye hit »That's The Way Love Is« and soulful originals »Guard My Heart« or the instrumental »Slow Dance« with as much energy and enthusiasm as any rock band half their collective ages. As long as Wenner's mouth harp is wailing and the rhythm section is jumping courtesy of longtime bassist Jan Zukowski and drummer Pete Ragusa, the Nighthawks are always going to deliver Grade A choice American music.