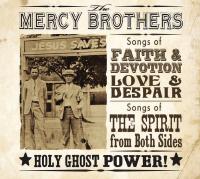 Louisiana musicians often blend zealous religious lyrics with the most raucous, rowdy accompaniment. From Ferriday’s rocking Jerry Lee Lewis and his preacher cousin Jimmy Swaggart, to the funky gospel guitarists Elder Utah Smith of New Orleans, and Reverend Charlie Jackson, of Baton Rouge -- to name but a few -- Louisiana music has long straddled that fine line between Saturday night blow-outs and Sunday morning reflection. The latest band to joyously explore this passionate roots-music border zone is the Lafayette-based Mercy Brothers -- as heard on their exuberant debut CD Holy Ghost Power, on Sockmo Music in the US and Rootsy in Europe. Formed in 2011 by veteran musicians Kevin Sekhani, Mark Meaux and Garland Theriot, the Mercy Brothers blend the spiritual fervor of an old-time tent revival with the rambunctious feel of a rural roadhouse -- combining the best elements of celestial and honky-tonk heaven. This unique holy hubbub hybrid, and a reputation for electrifying live shows that inspire impassioned sing-alongs, has won the band a loyal -- dare we day devout -- following. In 2012 they tore it up at both the Festival Internationale de la Louisiane and Festivals Acadien et Créole in Lafayette, and at New Orleans’ coolest new club, Chickie Wah-Wah, garnering glowing press from the Times of Acadiana and the New Orleans Times-Picayune, and starting a buzz in music circles around the nation. While the uptempo energy of Mercy Brothers’ country-tinged rocking songs can virtually make the lame walk again, the band’s original lyrics look beyond earthly pleasures to consider deeper issues:

Jesus is mentioned often in the Mercy Brothers’ lyrics. But the Mercy Brothers are not a Born Again band, nor proselytes for any one certain denomination; instead, the band takes the pulpit right to the people with songs of faith and devotion, love and despair, and tales of the spirit from high and low sides alike. What’s more, they do so with deliberate, intriguing ambiguity. As Mark Meaux explains, “Basically we're tapping into the tradition of the struggle for the spirit that produced Jerry Lee Lewis and Jimmy Swaggart. We're not basing it on any religious philosophy per se, but drawing on the shared cultural language of gospel music and televangelist hucksterism and the earliest rock and roll. It's good versus evil, and sincere expression versus show business, all swirled together, so it’s open to interpretation. There’s an inherent carnie aspect balanced with total sincerity. At the end of the day, it’s all rooted in respect. We’re not mocking anybody, whether it’s the hipster atheist or the Evangelical folks. Kevin truly inhabits the role of a preacher, the band walks a line, and we let the audience draw their own conclusions.” The Mercy Brothers also extend a gospel music tradition of bringing salvation to the heathens, so to speak, by performing in secular venues where alcohol is served. The venerable gospel group the Blind Boys of Alabama once faced criticism for this approach -- some gospel artists simply won’t do it -- but, as founding member Jimmy Carter explained “One of the best things that happened to us was going into the nightclubs. We have had people throw their drinks away when they heard our message. All the smoke and every¬thing is worth it if we can get one man to even think about a changed life." The Mercy Brothers don’t go quite so far as advocating total abstinence -- they encourage two-step dancers rather than twelve-step programs -- but, like the Blind Boys, they do want to make their audience think about redemption:

Lead singer Kevin Sekhani and lead guitarist Mark Meaux write almost all of the Mercy Brothers’ original material. Both come to the band with decades of professional experience in both Lafayette and Austin, the best known result of which is the quarter-century run of the Cajun-punk band The Bluerunners, which Meaux founded in 1987. Keyboardist Garland Theriot, who contributes mightily to the band’s arrangements, grew up near Lafayette listening to everything --- rock, country, Cajun music, zydeco, blues, funk, and more -- but “it was the gospel I listened to as a kid that led me to play piano.” Sekhani, Meaux, and Theriot are anchored by the mighty rhythm section of bassist Matt Thornton and Dave Nezat, who hold down the sanctified groove.

With the release of Holy Ghost Power one of South Louisiana’s most exciting and original new bands is fixing to preach and testify from coast to coast. Go see the Mercy Brothers some Saturday night -- but don’t be surprised if you’re still there on Sunday morning!

Other albums by Mercy Brothers, The: