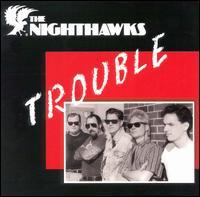 “Trouble”, which the Nighthawks dedicated to Doc Pomus, is a solid blues-rock outing that sometimes detours into blue-eyed soul and early rock & roll. Whatever the style, the Nighthawks bring a lot of grit and enthusiasm to the material, which ranges from Leiber and Stoller's »The Chicken and the Hawk« to Bobby »Blue« Bland's »(I Wouldn't) Treat a Dog.« The band also turns its attention to Sonny Terry & Brownie McGhee's »Ride and Roll,« a song that blues lovers associate with the Piedmont, GA, school of Southern country blues. But in the Nighthawks' hands, »Ride and Roll« doesn't sound like Georgia blues — they give the tune an electric blues-rock makeover, and their version is closer to Chicago than Georgia. Another highlight of the album is Bob Dylan's »You Go Your Way«; the Nighthawks haven't recorded many songs by the folk-rock icon, but this one works well for them. On many of their albums, the DC residents have been totally self-contained; but on Trouble, they have a few guests. One of them is »Steady Rollin'« Bob Margolin, best known for his years as Muddy Waters' guitarist, which makes him a perfect guest for the Nighthawks — both of them worship anything having to do with Chess Records. “Trouble” falls short of essential, but even so, it is one of the most enjoyable releases in the Nighthawks' history.