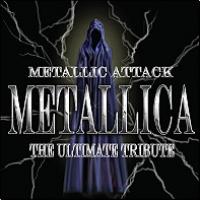 From the same people that brought you »Metallic Assault«, the first ever Metallica tribute CD, comes Metallic Attack, far and away the ULTIMATE Metallica tribute album, featuring MOTORHEAD, DEATH ANGEL, FLOTSAM & JETSAM and members of ANTHRAX, HELMET, JUDAS PRIEST, KISS, TESTAMENT, SUICIDAL TENDENCIES, WHITESNAKE and many, many more. Metallic Attack is the only Metallica tribute to ever include artists who were influences, peers and even bandmates of the group during their rise to rock supremacy. Death Angel’s lead singer Mark Osegueda lived with Metallica’s Kirk Hammett around the time the band was forming, while Flotsam & Jetsam’s original bassist Jason
Newsted would join Metallica in the late ’80s. And, of course, Motorhead, who are often cited as Metallica’s single greatest influence!