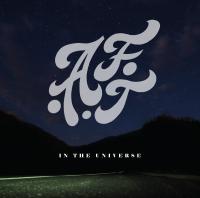 AFT
In The Universe
(Rootsy Music)

For many years Annika Fehling has cultivated her singer/songwriter craft. She's recorded 12 albums, arranged and participated in many songwriter retreats and toured, toured, toured. And developed into a truly gifted and skilled songwriter and solo performer.

But she's also developed an urge to expand the singer/songwriter format beyond what's really possible with just a voice and a guitar. To let her songs grow freely and to explore possibilities together with other musicians. Not studio musicians but a real band. Rehearsing, performing and recording together.

AFT (Annika Fehling Trio) is that band and »In The Universe« is their anticipated debut album. If you can use the word »debut « when Annika herself has made 12 album and the guitarist Christer Jonasson has performed and recorded with major Swedish bands since the early seventies. And the percussionist Robert Wahlström is an experienced musician and composer with an impressive CV.

»In The Universe« is an album with an abundance of creativity and curiosity. With Annika's songs as a starting point the trio has embarked a musical and emotional journey. It might journey without a goal,but »but it's the way that is the labour's worth«, as a famous Swedish poet once wrote

Join AFT in the universe!

Other albums by AFT: