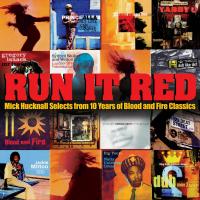 Mick Hucknall once remarked in an interview that there should be a statue of King Tubby in Kingston, Jamaica right alongside that of Bob Marley, in recognition of a musical contribution equal to, if not greater than that of Marley himself. So it comes as no surprise that when we asked Mick to compile a selection of his favourite Blood and Fire tracks to mark the label’s 10th anniversary that he should come up with a set heavily dominated by the explosive dubs of King Tubby and his protégé Prince Jammy. Also in the mix are heartfelt vocal performances from the likes of Gregory Isaacs, Junior Byles and Prince Alla, plus contributions from keyboard king Jackie Mittoo and deejay legend Big Youth, making this selection Mick’s own personal perspective on the catalogue he helped to create.